17 Times Emma Watson Killed Us With Her Deadly Looks 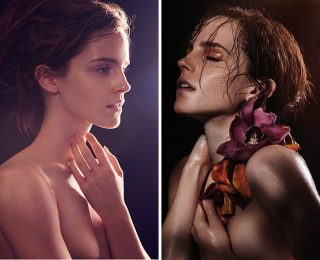 Emma Watson is literally a piece of perfection. From playing the very sassy, yet gorgeously smart Hermione Granger to stealing all our hearts even 15 years later. She never stops looking elegant, beautiful and extraordinarily stunning.
Just for the very amazing Emma Watson fans, we have collected a few perfect moments of the actress, and you can rest your eyes on her everlasting beauty.

Check out some of her flawless moments.

1. In the trailer of Bling Ring.

When the trailer Bling Ring was released and she was seen dancing like this in a club. So, gorgeous.

2. During this party at Paris Hilton’s house.

She might be pole dancer but she looks simply amazing.

3. When she stripped for a photo shoot.

4. Her cover image for GQ Magazine.

When she wore this sexy as hell outfit from her Bling Ring attire for a GQ magazine shoot.

5. Another photo shoot for W Magazine.

Combination of sheer class and style.

6. When she dressed gorgeously edgy for Teen Vogue.

7. When she proved that Emma and Hermione are just the same person.

8. When she was down to earth even after achieving so much fame.

In her recent interview with W magazine, she said that until she was 18, she would take the public bus and do normal things as much as possible. She also took a trip to America with some of her college friends and shared a common bathroom with 8 others in her dorm.

9. When she uploaded this very cute photograph on her Facebook page.

10. When she won an award for just being ‘amazing’.

Yes, it’s true. She won an MTV Trailblazer award for being amazing. You can Google it!

11. And then made such an inspirational speech after receiving the award.

It made so many eyes cry.

12. The time she won the People’s Choice award.

She also accepted the People’s Choice award for her contribution for The Perks of Being a Wallflower.

13. When she rocked this stunning dress at the red carpet.

14. And this killer dress

15. She was also exceptional when she blew a kiss to the crowd.

16. She was named Woman of the Year by GQ magazine.

17. For her entire performance in Bling Ring.

She plays a snobbish valley girl in the movie and she gave completely rocking performance.

16 People You Should Avoid Taking To Bar