8 Newest Words You Never Expected To Exist In A Dictionary 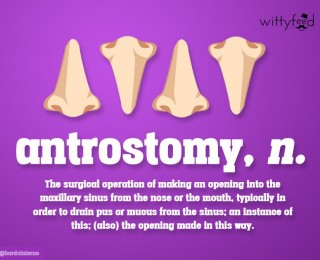 Welcome to the new world of words–dictionary, lexicon, vocabulary and whathaveyous. Above all other branches of science, art and learning, this universe is fastly evolving, like, every day. Use of words, or putting some meaning into them becomes a business to most of the societies as they love it to be creatively used. A day wouldn’t pass without a new set of words being formulated from witty mouths, and eventually, these became famous and acceptable for mankind’s consumption.

Right now, we have thousand of words recognized by linguistic institutions–“keeper of words”, like the Oxford English Dictionary. Just recently, they have become extensive with adapting local English terms. These words were devised based on cultural contexts and the existing vocabulary. Interestingly, some of these new words are medical, Oriental and Asian in origin.

This may be very familiar to the medical world, but the normal word users are not. So recently, this was approved to be part of the comprehensive English dictionary.

“You know my bruv, huh?” To the homies out there, this is familiar to you. Before it was bro, then it becomes bruh. Eventually, this word ‘bruv’ sprouted out. How is that?

Cantonese in origin, the word kaifong struck the attention of the language collectors, or the ‘keepers’. It’s a more oriental term for villagers, blockmate, flatmate, whatever-you-call-it. Right now, kaifong is interchangeable to ‘neighborhood buddies’.

Have you ever felt love but you cannot express it in words? There you go. The Asian term ‘kilig’ explains this feeling a lot. So guys, once you suddenly have a romantic moment, and you fail to explain it briefly, don’t hesitate to say “I’m in ‘kilig’ with you.”

Lepak is a Malaysian word that is shorter than hanging out, loitering, or having-fun-with-friends-moment. Have the freedom to use it, send your friends a message “Let’s lepak, right now!”

This was once an informal urban terminology, but now, it’s an official word. Redshirting is very familiar with athletic regions in the United States, and even in related cultures. It is a smart move for star players to redshirt, and for their honor perhaps, this made a place in the words list.

When you are a fan of everyday drama, might as well tag your life as a ‘teleserye’. Originating from the Philippines, this word was a witty mix of two words that means ‘television’ and ‘series.’ But, since in culture, this term perfectly describes soap operas, it has become an active term for such.

Contrary to popular demand, the word sidewind is not yet that acceptable before. But now, it’s accepted as the official movement of snakes in dunes. Come on! Or, for some reasons you wanted to escape from your nagging mom in a classical way, try sidewinding.

Shocked? There are more in the store!

16 Times Teenagers Proved They Are Not The Worst