9 Mysterious Photos That No One Could Explain 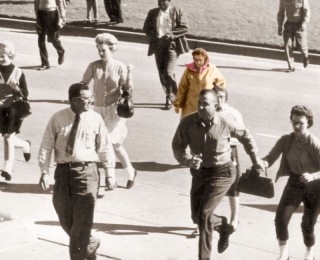 Science, logic and reasoning have all tried their best over the centuries to explain every little thing one can come across on this planet. Be it a phenomenon, an incident, or a simple observation, curious men have tried and often succeeded in cracking down the secret behind them. However, there still remain some things that are yet unexplained. Believe it or not, there are several such instances where science and human logics have failed, and here are nine of those interesting occurrences.

During the 1963 assassination of President John F. Kennedy, a woman is seen in photos and film, seemingly taking photos of herself as others run from the scene. The FBI tried to track down the woman, but her identity was never uncovered.

Norway’s Hessdalen Valley is famed for the vibrant lights that show up in photos throughout the year. Several studies have attempted to find the reason for these hues, but no substantial reason for the lights has been found.

In 1964, a couple spotted a gigantic tadpole-like creature calmly swimming towards them in the lagoon. The apparently 80-feet long creature seemingly hung around for a while before opening its mouth and moving off.

In 1964, a man photographed his daughter with no one in the background. However, after the photo was developed, it showed an astronaut-like someone standing behind the girl. The photo was even inspected by the Kodak company, which finally concluded that the photo was not even tampered with in any way.

In 1960, a dark tumbling object was reportedly spotted orbiting the Earth. At that time, no satellite had been launched, and nor was it identified as a man-made design.

The Copper family had just moved into their new home and snapped this photo. However, after development, the photo showed what looked like a human body falling from above.

This photo was taken by Apollo 17 during its last flight to the moon. The photo was listed as black due to extreme light exposure. However, when the contrast is increased, it reveals a pyramid-like structure.

This photo was taken in 1919 on the day of the funeral of fellow squad member, Freddy Jackson. However, at the back, there appears a head, which has been recognized by the squad members as the face of Freddy Jackson himself!

9. The mysterious case of Elisa Lam

Elisa Lam was found dead in a hotel’s rooftop water tank in 2013. Autopsy ruled out drugs and alcohol. However, footage captured in the hotel’s elevator moments before Elisa’s death showed her acting extremely strange, something that is hard to explain.

10 Simplest Tricks To Help Girls Look Attractive In No Time

Parents Created A Harry Potter Themed Nursery For Their Little Unborn Wizard And It Is Simply Amazing!