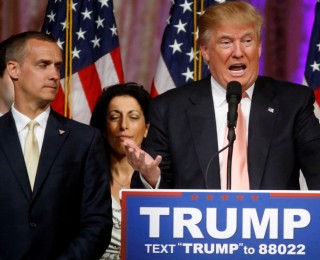 It looks like Donald Trump will lose a majority of his votes after this incident. This happened in Florida when Donald Trump’s aide, Corey Lewandowski assaulted Michelle Fields, a female reporter. To his luck, he was caught on camera while doing so!

He was later charged with assaulting a woman. Lewandowski is Donald Trump’s campaign manager. The two were there for an event at Trump’s golf course. Read the story to know more about what happened!

Corey Lewandowski surrendered to police at around 8 am, almost immediately after he was slammed with charges. He was later released and asked to appear in Palm county court on may 4.

What did he do?

Lewandowski grabbed and bruised Michelle by the arm while she was trying to ask trump question about affirmative action.

Michelle even tweeted a picture of her arm. You can actually see the finger marks on her arm.

Two days later, Lewandowski tweeted that he didn’t even know who Michelle was. He even wrote that he never touched her!

Trump later released a statement. He believes that Lewandowski is completely innocent of all the charges.

Plea for not guilty:

Trump’s campaign manager will be entering a plea for not guilty in court. The team is pretty confident that he’ll be exonerated.

Michelle was accused by Trump for changing her story after the video appeared. However, fields denied this.

12 3D Tattoos That Will Totally Boggle Your Mind

Octopus Houdini Can Escape Through Such A Small Hole, Unbelievable!