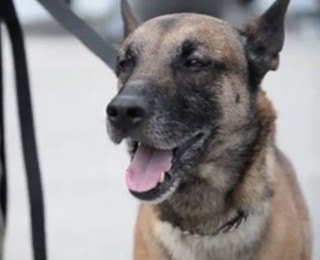 Wars aren’t fought by human soldiers alone – they’re accompanied by highly skilled military dogs, to name one of the many other living assets of the military. Speaking of asset, Rocky the military dog, has always been one US military. Rocky was separated from his handler, Specialist Andrew Brown, sustaining injuries in Afghanistan. But now, he was finally able to reunite with Andrew after a long time of constant surgeries, and the sight is overwhelming.

Rocky is a military dog, one that is an asset to the military.

Rocky fought in Afghanistan side by side with his handler, Specialist Andrew Brown.

Caught in an explosion.

However, the two of them were separated when they were caught in an unfortunate explosion and got severely wounded.

Rocky was taken to Germany for treatment.

Andrew back to the US.

Andrew was transported back to the US for treatment.

Brown was awarded a Purple Heart, and he gave one to Rocky. This spread like wildfire in the social media.

Rocky has had to undergo several surgeries.

Physiotherapy has been going on to try to see how much use of his leg Rocky can make out now after his injuries.

The separation was hard…

But the reunion was as much and probably more heartwarming.

If Rocky is retired…

If it is decided that it’s best for Rocky to retire, then there’s a family waiting to accept him – Andrew’s family.

16 Celebrities Who Look Beautiful Without Makeup

12 Airport Hacks That Will Make You Travel Like A Pro

10 Clever Reasons Why Law Is The Sexiest Profession!