London Police Found Drug Stash And Left A Surprising Note On It! 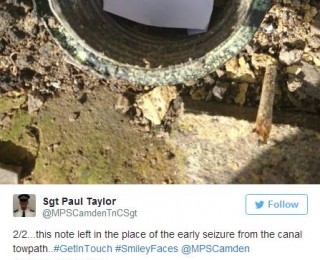 This really isn’t something new or something that could be classed as a new trend in Britain, this kind of stuff seems to be happening quite often nowadays which leads us to think, do the Police get great joy from shaming the public on social media? Who knows!

But one is for sure, Sgt Paul Taylor from the Met Police in London decide to leave a polite and straight to the point, not for a silly criminal who recently had his stash of drugs seized by the Met.

After the brilliant work provided by the sniffer dogs, the Camden Police decided it was time to leave the polite note in exchange for the drugs which the dealer wasn’t aware had gone.

We think it’s actually quite entertaining, but wouldn’t you suggest it might be a little bit of a waste towards Police time? Shouldn’t they be serving the public with recent crime statistics and joyful news on how the neighbourhoods are adapting from the local policing which takes part on a daily basis, surely they shouldn’t be spending time uploading photos on Twitter?

My opinion is simply this: It’s all fun and games, but does it really helps prevent crime?

I’m sure it will bring more followers to the social media accounts of the Police force, so maybe it is actually a good idea in a sense. Who knows? The more followers, the more people who might think twice before the squad exposes them to the public.

This is what we like to call BANTER here in the UK.

The substance appears to be Class B drug – Cannabis.

Well its better than noting isn’t it? A polite note left by the Police.

The Stash Police Found & The Tweet that came afterwards

Here is the Tweet Sgt Paul Taylor posted after uploading a photo of the substance they found.