Look Closely At This Photo Of Two Cops, They Are Going Viral For A Reason! 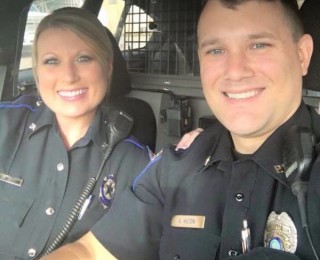 A lot of negativity has been surrounding law enforcement recently in the United States. Officer Brittany Beard Hilton posted a photo on her Facebook page in response to that. She never expected it would go amazingly viral with over 100,000 shares. The picture is pretty simple showing her and a fellow officer in uniform, but there is more to it if you look closely.

The photo is of Brittany and her husband on the Thanksgiving day on duty instead of being with their family. She was posing in a squad car with her husband who is a police officer in Texas. Thay have four daughters to raise.

She never thought it would go viral with over 10,000 shares.

When Brittney was 3, her mother was murdered. Driven by the need to help others, she became a police officer.

The photo was in the response to the negative criticisms law enforcement has been receiving.

She wanted to raise awareness that police officers make a lot of sacrifices for their family and risk their lives to help people.

She had even been told by many people that she deserves to be ‘shot in the head.’ While Steven understands that some people have had the bad experience with the police, Brittney continues to pray for them.

Britney’s message for the public…

“All you may see in this photo is two smiling police officers. But there is more. We are husband and wife, parents to four beautiful girls, we are a son and a daughter, a Brother and sister, a grandson and granddaughter, a Niece and nephew. (Steven is also an army veteran). We are friends to many.”

“Before you say hateful things and put all officers in a category….remember we are all individuals attached to a delicate thin blue line. We are attacked daily and getting killed just for putting on a badge. You voice your opinion, and rally against law enforcement over tickets!! We are risking our lives.”

This photograph was taken on the Thanksgiving day. “My husband and I both decided to work, giving up time with our family so the community would be safe. Think before you speak. Your words could promote deadly actions. WE BLEED BLUE! All lives matter.

13 Most Insane Manmade Marvels Ever Built