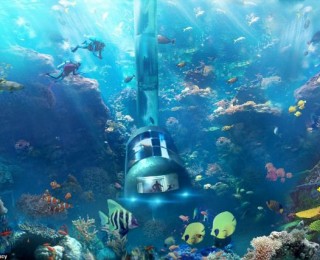 Get you snorkel’s on and take a journey with me to this fantastic underwater hotel that is waiting for your mighty comments. We now have a lot of them from Maldives to Dubai. An underwater hotel might sound like a fantasy now, but it will soon be a reality. A luxury boutique, deep beneath the crystal-clear water of the sea, is in the making. It would be the perfect destination for tourists. It will have the entire sea life surrounding it, thus giving an unparalleled experience of being in the sea. And for those who believe, who knows, it might just be your chance to spot a mermaid.

Although there are still no hotels that are fully inundated, you can stay in underwater rooms all over the world. Hotels like the Atlantis, The Palm in Dubai have forged the concept and you can now have a stay in one of their underwater suites.

An underwater hotel is one of the most amazing adventures of life. Those who love marine life and want to explore the mighty water species either visit the artificial lakes or aquariums, or go to the nearby sea points and rivers. But what if you get the chance of exploring the beautiful underwater species very closely, isn’t it amazing?

Target Locations have been identified, and they even include Hawaii and the Bahamas!

Designers have started working on that spellbinding project. “We have selected a superior international location for our test site for the single unit hotel, and once the permit is issued then the countdown clock begins,” the chief designer explained. “We will offer an opportunity to be part of the inner space tourism industry to every Caribbean island nation, too. All they have to do is approve a mooring location for the Planet Ocean Underwater Hotel single unit with elevator. We will provide the protection, management and expansion of the most fascinating hotels on the planet.”

Costs around a stupendous $20 million

It is classically drafted to be built as a vessel as it can move through the waters, thanks to its technology of electro-mechanical propulsion. Put it in another way, there’ll no worries of hurricanes. The designers would make the hotel a movable, modular vessel that can be moved if possible, a preventative measure to keep guests safe from hurricanes. Each pod would also be outfitted with flotation side bags so there would be no risk of sinking. The design is not the first of its kind. Other examples include the yet-to-be-completed Poseidon Undersea Resorts in Fiji or Atlantis at The Palm Dubai, but Webb insists that his design would be more cost effective and as much as $1,000 cheaper per night than competitors. The structure has a 12 room design, and is estimated to have a whopping $20 million cost.

A great news for all those adventurous holiday-makers out there!

Each pod would come with a king-sized bed, bathroom, internet, and massive panoramic acrylic windows and walls looking out to the ocean bed. The Planet Ocean Underwater Hotel has received USA Patent and Trademark approval as the world’s first underwater hotel – with Egypt, Malaysia, Hawaii and the Bahama. It will offer an entirely futuristic and one-of-its-kind experience to its customers, which will include a panoramic view of the ocean world, a whole 28-feet below the sea level.

8 Evil Ways To Get The Perfect Revenge On Jerks

9 Most Haunted Hotels Around The World