This Designer Thigh Gap Jewelry Is Trending Among Girls, And It’s Super Sexy! 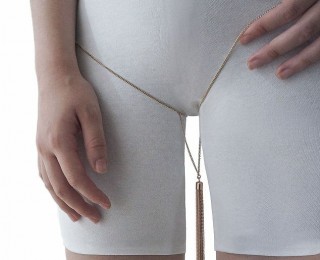 Women nowadays are becoming body aspirants regarding their thigh gap or thigh distance. Relatively, a creative designer has designed ornaments to make them hang them up between the two concave thighs. The trend is supported by women to have quite stick-thin legs and so to create awareness about this agitating trend, the designer takes the step.

Know what was the actual concept behind creating this kind of jewellery pieces. And this thigh gap is announced as one of the ultimate body goals by many dieters.

Designer ‘Soo Kyung Bae’ from Singapore created thigh gap jewellery that can be placed between a woman’s upper thighs.

Purpose of designing such accessories.

TGAP is the first website that listed thigh gap jewellery for sale while considering the worrying weight loss trend among youth. The jewellery highlighted the much sought-after thigh gap.

The jewellery contains 18k gold plated chains that formed loops around the tops of thighs which seems as a gold tassel between thighs.

Varied versions of the pieces and tassels available

The website showcased different kinds of decorative pieces, with available variations in tassels and plates.

TGAP’s peculiar jewellery was designed keeping in mind scraggy –thigh-ed women rather than for them who tend to g skinny. It seemed that TGAP was concerned, but it came out something else.

When customers explored the jewellery pieces and added them to their bag but once when they hit check out, they were redirected to the page revealing that the site is all a humbug.

The designer elucidated the reason to play the trick as they wanted to create a reaction in respond to the growing weight loss trend which is been promoted by social media. The close up look of the chain did not look like it would stay up by itself.

Bae added more by saying that the jewels were created to get responses to the desirable sparking questions. They wanted society to think and reflect upon all those absurd things what society is valuing and obsessing over.