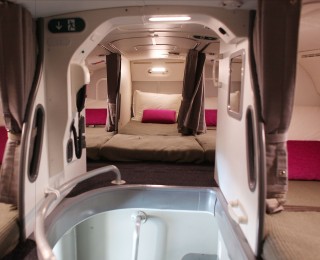 I am talking to all those passengers who travel for long hours via plane and don’t get to rest their optimum level. Yes, to those jet lagged people. While you are trying hard to sleep or taking a nap on those recliners, the pretty looking air hostesses are tucked in a secretive room over the cockpit. Yes, you can happily go all ‘J’ now.

Here is the area that the airplane crew retreats.

I know right! Even Regina George is like “WHAT”.

This is just the beginning. There are more secrets to unfold.

It usually depends on the plane but the crew rests are hidden behind the cockpit.

Secret stairs lead up to the bedrooms where the crew sleeps.

The steps are hidden behind the door that’s usually near the cockpit.

And a code or a secret key is used to open it.

But some even enter through a secret hatch that looks like a typical overhead bin.

This is American Airline’s Boeing 773.

Upstairs is cramped with windowless bedrooms having 8 beds.

This is the cabin rest area on the Boeing 787 Dreamliner.

Look at the crew enjoying the overhead rest area on Boeing 777s.

Pilots have their own sleeping area with two roomy sleeping berths.

And you will be amazed to know that there is enough room for a closet, a sink, and a lavatory. WOW!

The beds are generally 6 feet long and two and a half feet wide.

They are partitioned with curtains.

Besides stifling sounds, curtains seem to be there for more than just privacy.

The strict one per one bunk enforces advice against any kind of funny business.

These bunks generally have reading lights, hooks and mirrors.

They usually come with blankets, pillows and sometimes even with pj’s.

Some even come with entertainment systems. WHAT?

Some planes even have partitioned off beds along an aisle.

With no room to stand.

This looks way too cooler than what I imagined.

10 Simplest Tricks To Help Girls Look Attractive In No Time

Crazy YouTuber Sets Fire To 6000 Matchsticks Together. See What Happens Next!

This House Seems Strange From Outside, But When You Enter… Shocking!

8 Evil Ways To Get The Perfect Revenge On Jerks